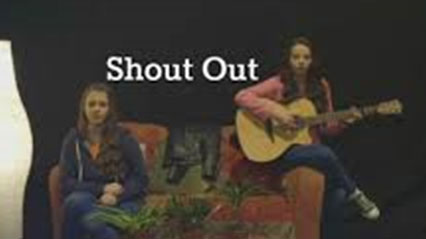 Young Twins Shout Out About Death Of A Friend

In a bid to cope with their grief Brittany composed a song (called “Shout Out”) revealing her feelings at the time.

While working on the song with me I felt that it had a powerful message and suggested that they should bring something positive from this untimely death by using the song to raise awareness of the growing problem of mental health issues that young people have today and also raise money for a charity.
The song was recorded and is available to purchase from iTunes NOW,
with all sales from the download being donated to Young Minds (charity for children suffering mental health issues) chosen by Heather’s parents.

Students at the Royal Conservatoire Of Scotland have made a powerful and emotional video of the song capturing the psychological stresses that children face in present times.

Brittany said “if we get enough publicity it will create awareness and if this song or video helps just one person to “shout out” and ask for help, then this project will have been a success and Heather’s death will have helped save another’s life” she continued “it’s so sad that our generation feel so much pressure in a modern society” Can I ask you to buy the single and also share this post.

By buying the single (0.79p) you will be helping this worthwhile charity.